Biblical criticism fascinates me. I understand the desire to attack supernatural belief: the supernatural it is both nonsensical and dangerous. But when critics use that desire to teach their own nonsense then the cure is worse than the disease. We expect scholars to have higher standards than that. Take the destruction of Sodom and Gomorrah for example.

This summary of the evidence is typical of the scholarly consensus:


"The cities are all destroyed by God and no traces of them have ever been found. The real reason is that they were not there in the first place!"

This is an odd conclusion given the evidence in the same article. He describes how cities were typically burnt:


"Like the Romans at Carthage, Assyrian rulers razed rebellious cities, spread the site with salt and sulphur, and sowed their fields with thistles, leaving desolation. When, in Genesis 19, Yehouah rained fire and sulphur on the wicked cities and left them desolate, He had used the foreigner to serve up the punishment agreed by the parties to the vassalage treaties."

So we see that this was a practice that crossed cultures and spanned millennia (Assyria was founded in 1900 BC and its empire lasted until Babylon conquered in 612; Rome sacked Carthage in 146 BC). Given that earlier cities were easier to burn (they were closer together, with fewer stone buildings) fire was probably the method of choice since time immemorial.

The interesting detail is that, when fighting became futile, the weaker side accepted their fate as the judgment of the gods. The author says the punishment was "agreed" and refers to Isaiah saying such punishments were from God. Genesis records that when the cities were due to be burned the people first left with their belongings, and they had to just accept it: they were not to look back.

In that context the following passage later in the article is interesting.


Sodom and Gomorrah in the mythological timescale of the Jewish scriptures were destroyed in the second millennium BC. R T Schaub and W Rast spent 15 years excavating about 30 ruins around the Dead Sea hoping to find Sodom and Gomorrah. Two towns to the south east of the Dead Sea had been spectacularly abandoned about 2350 BC. They were Bab edh-Dhra and Numeira, the latter of which was burnt up in a fierce conflagration in the season of the grape harvest for carbonized grape skins were found in the ashes. No human remains or small items were found, and the doorways at Numeira had been deliberately blocked with stones, so the people had had time to prepare for the disaster and to escape it with their belongings. Even so, they never returned.

Note that the author places the destruction in the "second millennium" (i.e. between 2000 and 1000 BC), making this seem like a different time period from 2350 BC. But the best internal Bible date suggests the 2067 BC, or the third millennium. Given the margin of error for both dates, this is the same time period.

So let's see. The Bible describes something that seem, at first glance to be highly unlikely: enemies raining fire on a city, and the people escaping beforehand, but not looking back. Then we discover that this was normal practice. And then we discover cities that were abandoned in the right time and the right place, with evidence that the people left first, accepting it as the judgment of God, with no intention of going back.

And what does the scholar conclude? That it never happened.

Sure, whatever you say. 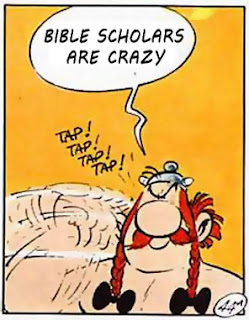 Posted by Chris Tolworthy at 12:30